A few months ago I was delighted to receive an email from my dear friend Gabriella Lombardi inviting me to her tea organisation’s first show devoted entirely to tea. Protea, formed by Gabriella Lombardi and Salvatore Nicchi is a non-profit organisation for the promotion of tea which is affiliated with the Italian Association of Culture and Sports and is also a member of the International Tea Committee. Their goal is to create an open community of people who share a passion for tea and its culture, and they run professional courses on tea, organise tea culture trips and also promote championships, demonstrations and performances of different skills related to the art of tea tasting, pairing tea and food and running the ‘Tea Masters Cup, Italy’.

The European Tea Show was an exclusive trade fair event aimed at Italian and international professionals in the tea sector. It was recommended that producers importers, exporters, distributers and growers should attend and 10,000 people overall attended. 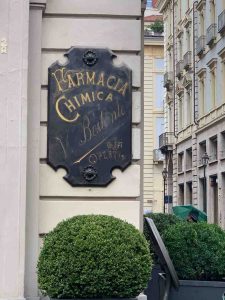 I arrived in Turin late on the 19th November, which gave me the day to enjoy the beautiful city that is Turin before the Tea Shows opening ceremony on the 21st. I spent this 24 hours visiting some of Turin’s famous attractions including the Egyptian Museum, Farmacia Del Cambio and The Royal Palace. Although not specifically tea related I felt it would a waste of a visit to Turin without sampling some of its cultural and gastronomic delights. Cambio and Farmacia are the very definition of gastronomic and whilst I did not eat at Cambio (a Michelin starred restaurant) I was lucky enough to go to Farmacia and sample some of their delicious pastries and coffee. One of the fun parts of going to the Farmacia is being able to view the Michelin starred kitchen of Cambio in full swing through a large window in the café, which is an amazing and absorbing thing to watch whilst you nibble on your divine pastry and sip your coffee. 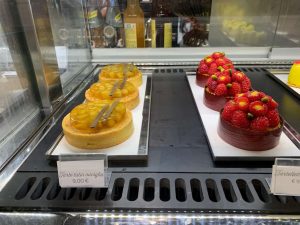 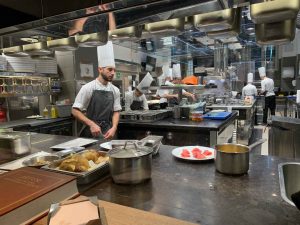 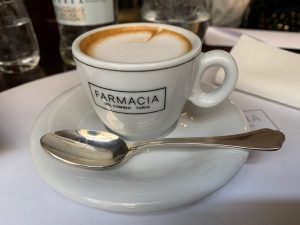 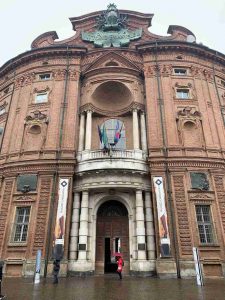 The following day I arrived at the Royal Palace for 10am for the opening ceremony of the Tea Show. The space we used within the Palace was actually within the museum of the Italian Resurgence. I was privileged to listen to speakers from Poland, South Africa, UK, Russia, Sri Lanka, Italy, South Korea and Japan, which gives you some idea of the success Gabriella had in encouraging ‘tea people’ from all over the world to attend the show. The UK Tea and Infusions Association (of which I am proud to be a board member) was represented by our chair Dr Sharon Hall, who explained about some of the technical issues that tea will be facing in the coming decade, amongst other things. We finished at about 2:30pm by which time everyone was ready for lunch and we were delighted to be given a delicious buffet by the Turin Chamber of Commerce and which gave me the opportunity to network with both old friends and new from around the world. 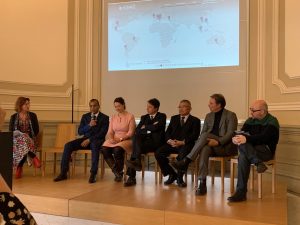 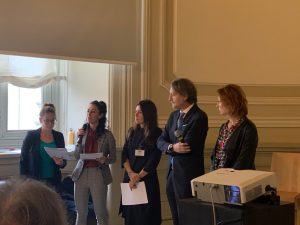 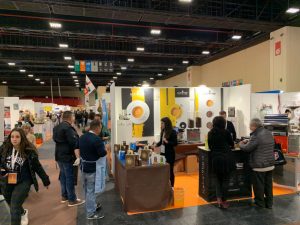 22nd November was the first day of the show itself, which was held at Lingotta Fiere, the former FIAT factory and is notable for its architectural beauty and also the fact that it had a fully functional and very well used test track on its roof on which many FIAT derived cars were tested. FIAT were there until 1982 and it is now a gargantuan shopping mall and a well-thought out conference and exhibition centre.Arriving at 10am, I first walked around the hall we had been allocated to see what was what. Many of the people I had met the previous day and also many new people were exhibiting and so I spent some time visiting each stall and finding out what was happening with each of the exhibitors. 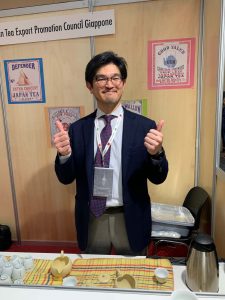 I was very kindly offered some special high GABA Japanese Sencha which was very kindly made for me for Nori Kawamoto and which relaxed me enormously after rushing through the Italian traffic to be at the show on time. The rest of the day was full of very interesting Master classes and workshops. The workshops that ran through the afternoon really were amazing and were about pairing tea with other foods. I was very interested to attend the following workshops on pairing…
Tea and cheese
Tea and cold cuts
Tea and natural sweets
And one of my favourites, Tea and Beer where I was very pleased to drink some white beer that had been brewed with green tea, which was far nicer than it sounds and very refreshing. 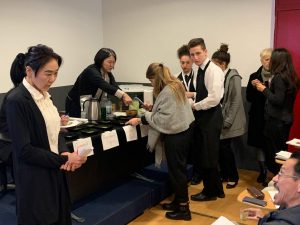 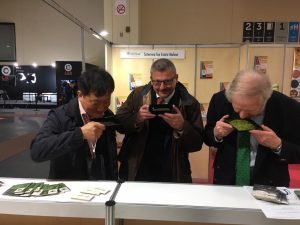 By 9pm the show was over for the first day and I returned to my hotel slightly buzzing from caffeine and full of new ideas and flavours from my first wonderful day at the European Tea Show.

The 2nd day (23rd) was the Tea Associations of Canada’s Tea Sommelier Awards Ceremony and the master classes on this day were a little more tea and culture oriented. At 10:30am on the Saturday morning it was a real pleasure to listen to my dear friend Junko Hosomi who explained about the nature of Sumi-e, which is Japanese ink painting and how to portray nature’s beauty through inner awareness. Then I attended two more classes, one about Vietnam and Shan Tea, which was presented by Andrei Ivanov and a guided Sencha tasting by the Nihoncha Instructor Association as well as a wonderful tea and chocolate tasting by Giovanni Battista Mantelli.

On Sunday I travelled back to the UK with my head full of new ideas and challenging existing ideas from discussion I had had with my tea friends. That’s one of the things about tea, you meet some wonderful people from all over the world and everyone is bound together by their common love of tea. Given that this was the first European Tea Show, and that it was held in Turin, the home of coffee, the show was extremely well attended even with a public transport strike and a bomb scare, people did not seem discouraged from attending what I hope becomes a regular event each year in November.