In July 2015 I was approached by someone I had known for many years in the tea trade, Mr Malcolm Ferris-Lay and he asked if I’d be interested in being involved with a group he was putting together which aimed to promote the history of tea in the City of London. He had already ‘recruited’ several other significant and long-serving members of the British Tea Trade, all of whom had worked in and around the various historic ‘tea sites’ in London during the heady days of the British tea trade from the 1950s onwards. The combined length of service of just four of these ‘tea people’ is 200 years! 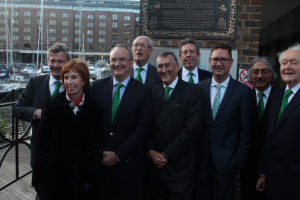 An Association was formed, with a Board of Directors and I am very proud to be a member of that Board. We then collectively set about approaching the various UK tea companies and also the owners of the historic tea buildings and locations we wished to recognise for resourcing the project and also for permission to place the proposed plaques. One plaque has already been placed at St Katherine’s Dock with a further three planned at The Tea Building in Shoreditch, Sir John Lyon House in EC4 and Plantation House (now Plantation Place) on Fenchurch Street. Plantation House was in the 1950’s the second biggest office building in the City of London!

A tea walk around these sites in Central London is now being created where interested parties will be taken by an expert guide around the various tea locations for a small fee. We will publish details of this walk once finalised at a later date.