Northern Tea Merchants are specialist contract packers of teas, coffees and cocoa, based in Chesterfield, Derbyshire.

We even personally source and taste every one of our teas and coffees, travelling regular to plantations around the world to purchase what we believe are the very best teas, coffees and cocoa.

The proof, as they say, is in the pudding (or drinking). Over two million cups of our tea and coffee are enjoyed every week!

Although established in 1959 by Managing Director David Pogson, the history of Northern Tea Merchants goes back to 1926 and three generations of the Pogson family. Read on to find out more….

We are delighted to share the memoirs of David Pogson our Managing Director. He has run our tea business Northern Tea Merchants since 1959 after receiving a thorough grounding in the trade from his Father who entered the tea trade in 1926. Read his memoirs and see some of the photographs from our archives below.

Why not take a journey back through time and discover our heritage... 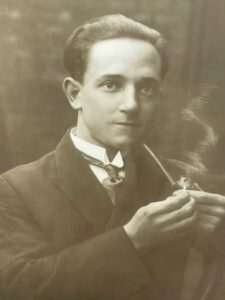 My father, Albert (born 1901) was a very fit man, performing 'Strong Man' exhibitions in the Lincoln area during the early 1920s. He became involved with tea for the first time in 1926, when he commenced employment with The Ceylon Tea Growers Association (Nottingham). He was a hard and diligent worker and was soon promoted to the position of Van Sales Supervisor. 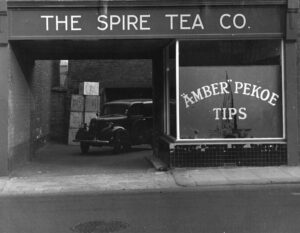 In 1936 he started a business of his own, trading as The Spire Tea Company in Chesterfield. He wore a bowler hat and plus fours and sold high quality tea door-to-door from an Austin 7 van. There were many firms selling tea in this manner at the time - long before the dawn of supermarkets. Ingrams, Wells Empson, Willoughbys, (all based in Sheffield), The Tonic Tea Company (which later became Midland Tea Distributors, based in Leicester) and Jayaness (Johnson and Sutcliffe) based in Nottingham.

My very first job was ‘helping’ my Father cut out coupons from his customer’s ration books, for submission to the Ministry of Food, during the mid 1940s. I also eagerly looked forwards to any school holidays when I was able to accompany him on his delivery rounds. The love of the wonderful smell of tea that always emanated from his office had become so implanted in me that I was able to resist all his wishes to 'do better for myself’ than he had done and when I left school at 16, he reluctantly agreed to let me follow in his footsteps. So, for the next few years, at a wage of £3 per week (plus a 6d commission for each new customer I gained), I knocked on thousands of doors, offering our tea for sale. Business was good, as my Father, like me, and like my son, believed in selling good quality teas to gain regular, repeat business. This is a maxim that has held us true since 1936!

I believed that there was merit in expanding my Father’s business by creating wholesale, as well as retail business. A rift developed, which ultimately caused me to leave his employment and start a tea business of my own. I had saved the majority of my wages earned with my Father, so, with the princely sum of £500, I invested in a new Ford Thames Van for £300 and I used the remaining £200 to invest in stocks of fine quality teas from Midland Tea Distributors in Leicester. I said to myself that I would try it on my own for a month, and see what success I had. So, on 1st May 1959, Northern Tea Merchants was born.

I didn’t want to encroach on my Father’s business, so I worked mainly in Sheffield and Rotherham. I worked on average 80 hours a week selling leaf tea and ground coffee, and at the end of the first year, had made a useful profit of £469. With continued efforts, I continued in this trading pattern, and gradually made enough headway to purchase two more delivery vans and to employ two van salesmen.

By 1966 I had increased sales volume and required more storage space. I had sufficient money saved to have a new warehouse built. This gave me the opportunity to pack all the teas I was selling. I used this warehouse for 12 years until 1978, during which time I bought a coffee roaster and a tea bag manufacturing machine. Northern Tea Merchants one of the first companies in the UK to manufacture tea bags. The years after the Second World War were dominated by brands such as Ty-Phoo, Brooke Bond (Dividend and Pre-Gestee), Edgelets, Hornimans and Lyons Quick-Brew. During the 1960s, my main customer base had grown from retail tea door-to-door to wholesale supply to commercial caterers and Grocers’ shops. At the time, there were approximately 800 Grocers’ shops within a 20-mile radius of Chesterfield. The change from loose tea to tea bags was most welcome—it opened up the grocery trade to new suppliers such as Northern Tea Merchants, who could offer them excellent value and good margins of profit over and above the brands.

During the next few years, I bought two other businesses—Classic Coffees (Nottinghamshire) and Ingrams Tea Merchants (Sheffield). My Father also retired in 1971, due to health reasons, and his business amalgamated with mine, and I continued to supply his customers, many of who had known me as a young man. 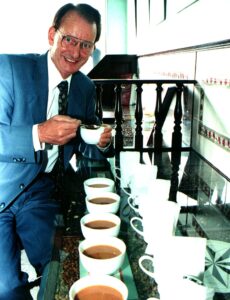 By 1978, my sales volumes had increased further, so I sold my warehouse and bought bigger premises on Chatsworth Road, Chesterfield. The further increased volumes of tea that I was selling became sufficient to enable me to bid for supplies through the London Tea Auctions, using my brokers, Gow White (today called Thompson, Lloyd & Ewart). I was bidding against the 'giants' of the Tea Trade and buying teas at the same prices they were buying at. My overheads were far lower than theirs, and I found it an exhilarating experience to find myself, a sole trader, in a position to be able to compete favourably on like for like qualities with any company in the UK. The first lot of tea that I bought in the London Auctions was an Assam Tea from Hapjan estate followed by a range of Kenyan and Ceylon teas.

I have built three warehouse extensions to our Chatsworth Road premises to store bulk stocks required for contract packing work (packing teas, coffees, cocoa, chocolate and superfoods for other brands).

Products we have packed are on sale in Sainsburys, Waitrose, Harrods, The Co-Op, Holland and Barrett, plus over 3000 independent retailers, caterers, County and City Councils, cafes, restaurants, delicatessens, coffee shops, tea rooms and other commercial organisations who make up our customer base today.

My son, James, left school in 1988 and has worked for Northern Tea Merchants ever since. He has learned about the Tea Trade from me and in more detail from visiting tea and coffee producers at origin over the last 15-20 years. As well as visiting these producers, he has spoken at conferences in Kenya, China, Sri Lanka, Thailand, Myanmar, South Korea, Colombia, Brazil, Sumatra, Jamaica and Peru. He has also worked with other businesses and associations within Europe both in an advisory role and as a judge for several international tea competitions. He has appeared on TV and Radio talking about tea and coffee, and is a Board Member of the London Tea History Association. He is an Executive Director of the UK Tea and Infusions Association and was Vice President and then President of this auspicious organisation between 2013 and 2017. I made him a Director of Northern Tea Merchants Ltd in 2007.

Together, we have taken Northern Tea Merchants Ltd forwards to become…

To enable the progress I have made over the last 60 years, from door to door salesman to Managing Director of a business trading internationally, I have enjoyed the support of outstanding members of staff who have given consistent, dedicated, loyal commitment over long periods of time. Some of my staff today have worked for me for over 30 years!

My philosophy is that the most important thing in life is to satisfy your mind in everything that you do. Working in the tea trade has certainly tested this philosophy—but I’d still love to be young enough to do it all again!